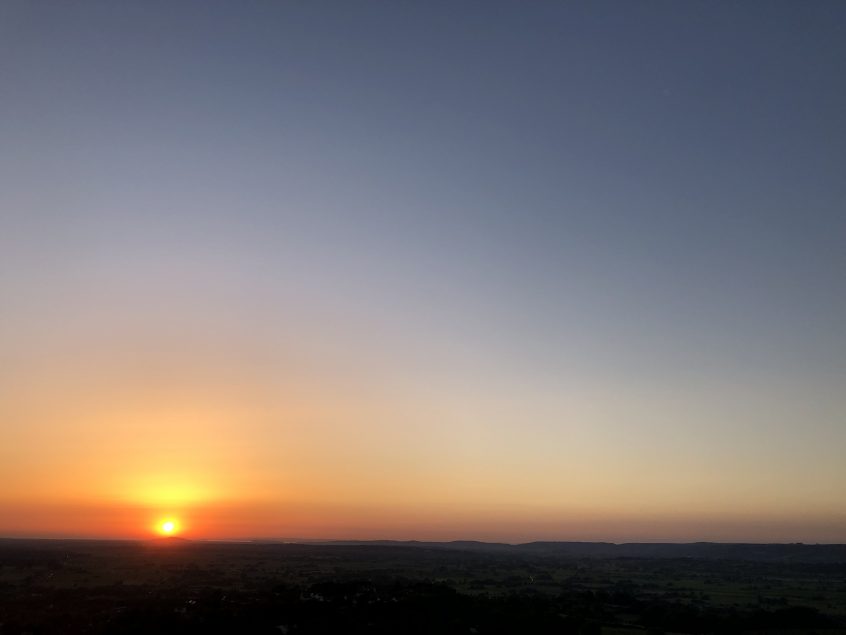 It’s been just over half a year since I relaunched my business as Responsive Editing. I wrote then about the process of renaming, rebranding and the new website, and in that post I said I would write again in six months’ time on how it had all gone. That time is about now.

Apparently in other news, yesterday evening we climbed Glastonbury Tor to watch the sunset. It had been a perfectly hot and sunny day, and by evening the sky was cloudless and a textbook sunset looked certain. The top of the Tor was busy with little knots of people sitting down to wait, or practising yoga, or taking photographs of their children in the golden light, or banging tambourines or playing the fiddle, or just sipping quietly on a solitary tin of beer, or passing a joint to the person sitting next to them. Just behind where we were sitting a young man invited himself and his friend and their clutch of cans of cider to join two young women. He’d been taking mushrooms, he said. A slightly incoherent courtship ritual then played out, culminating in the young man (who was all the way from Liverpool, via Cambridge) taking a photograph of one of the young women that was instantly deemed to be the best photograph she’d ever had taken of her in her life. Not just one of the more flattering ones, but the actual best. This fact was crowed over in their little group for a few minutes, then jubilantly relayed at length to another friend via a loud video call. The icy glares this slight commotion was drawing from one of the solitary tin drinkers notwithstanding, it seemed that everything was working out for the best in the best of all possible worlds.

As the sun flattened and turned red, and descended towards Wales through the dustiness near the horizon, a stillness fell. Even the friendly young man’s verbal stream was evaporating, until after a long pause I heard him mutter ‘shit, man, I can’t believe what I’m seeing’, and then finally he went dead silent.

There’s something so primal about the daily disappearance of our friend the sun, which usually goes unnoticed and unremarked. The hot red sliver growing thinner and thinner, slipping away, and you want to reach out and tug it back, but then it’s just a single drop of light on a black ridge or the edge of the sea, and then before you know it, it’s gone, as if it was never there. Beyond the reach of any grasping fingertips, and all you’re left with is the chill in its wake and the hope that it will return tomorrow.

When that last drop of sun slipped away from us all yesterday, there was a spontaneous round of applause. No one expected us to clap, we just did, because something happened that had moved a majority of us, and we had responded. There was a powerful, if fleeting, sense of connection. A feeling of being part of something beautiful and pure, and much bigger than ourselves.

The other day, someone asked me why I write. I said that I like to do it because sometimes I find it easier and more effective to communicate that way, rather than by speaking, and because I want to share something and make people (and myself) feel less alone. In other words, I use it to feel more connected.

Also the other day, a different person asked me if I had enough work. When I said that I had, more than enough, they said that was ironic, because at the start of the pandemic I’d been worried that work would dry up. I explained that actually it wasn’t ironic that I had a lot of work, it was because, following a period in which a significant source of income actually did dry up, I had rebranded and relaunched my business, and put a great deal of effort into marketing myself to both new and existing clients.

Sometimes, because I’m an inveterate worrier, a worrier par excellence in fact, I worry that the work I do is trivial. That it’s not saving lives, that it’s not changing the world. Sure, I get paid for it, but what else? What is its real purpose or use? But then many other times I remember, or sometimes I am reminded, that it does have a place, and it does have worth. It is about helping other people to connect, to get their message out. Quite often, I find I agree with their message, or it excites me, and that’s even better.

The rebrand was all about finding new ways to connect, and it has had specific measurable effects, as follows:

It’s had other less tangible effects too, but I’m certain they’re real:

So I can conclude that the rebranding exercise has been an unqualified success. It’s revitalised my business, represents who I am as a professional right now, and reflects the world in which I work. There’s so much about everything that has happened, and is still happening – here in the UK, where I am, and globally – that is concerning (terrifying?) and uncertain. But what I do has a place, it can be a force for good in a small way – we all count! – and I have done what I can for now to hold on to that place, and to stay engaged and connected, and even optimistic. And I want to continue to help others do that too.

2 Comments on “Respond and connect”