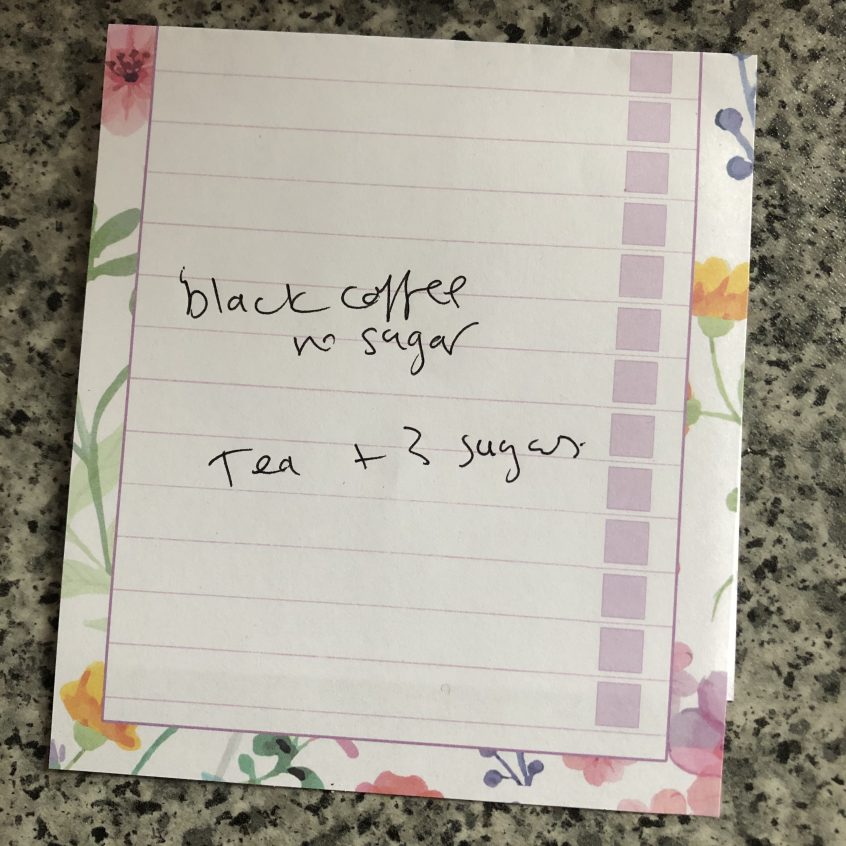 I love to-do lists. As the owner of a small business, I have a million and one things to remember to do, from meeting major deadlines to all of the minuscule pieces of admin that keep things running smoothly and legally. Then of course there are the parallel demands of a fairly busy household. I used to keep a notebook on my desk to write all these things down in, which worked all right when I had only one desk. But for the past few years I’ve worked sometimes in my office, just around the corner from where I live, and sometimes at my dining table at home. This semi-nomadic working lifestyle meant I risked being in a different building from my trusty analogue list, and so I started using Todoist, synced across devices.

Now if I have my phone on me, then wherever I am, I still know what I’m meant to be doing, and in what order. The first thing I do when I wake up, after making coffee, is sift through that day’s to-do list and get my head around what’s going to happen. Or at least, what I would like to happen in an ideal world.

I’ve always been a bit of a slave to the written word, which is probably why I do what I do for a living. But it’s reached the point now where I seem incapable of doing anything at all, or remembering anything at all, unless I have previously written it down. Take the image at the top of the post. I’m having work done on my bathroom, and I asked the builders if they wanted a cuppa. By the time I got downstairs, I was terrified that I’d have forgotten what they wanted before the kettle had boiled, so I scrawled down their requirements in a complete panic. (Yes, my handwriting is appalling.)

Sometimes I feel a little concerned that my fervent reliance on to-do lists – effectively outsourcing my own memory – has made me incapable of retaining things without a written prop. A few years ago, when I literally forgot the name of the place I was driving to with my children in the back of the car, I feared that this goldfish-like quality would cause problems in my editing life. In my work, like all editors, I rely heavily on my powers of recall, and fortunately they still seem to function OK in that context. I have excellent retention of spelling and hyphenation variations within a document, and I tend to remember if I’ve seen a particular phrase already, just a few paragraphs earlier. In written form I’m good at retaining names, and places, and details of all sorts of things. Just not the reason I went upstairs two minutes ago.

My earliest electronic to-do lists were built in the free version of Todoist, which worked quite well, but soon I began hankering after greater functionality – specifically, the ability to create recurring reminders. Never again need I forget that my son has Forest School on a Monday, or that both children have PE on a Tuesday, or that everyone’s bedding needs washing more often than once in a blue moon! I have daily reminders set up, some weekly ones, a couple of two-weekly ones, a three-weekly one, and several annual ones. There’s even one designed to pop up once a decade to remind me to renew my passport. If a thing recurs, I’ll add it to the list.

Perhaps the only problem I have identified with the electronic to-do list – but it’s a big one – is that if I forget to put something on it, it can fall through the net. Because I rely so heavily on the list to tell me what to do next, if something was never there in the first place (or was prematurely ticked off by accident), it simply won’t get done. This results in me sometimes wandering phoneless, muttering to myself as if praying, but really I’m just trying to make sure the thing I need to do stays in my brain long enough for me to get it down in writing.

There’s an art to constructing a good to-do list. It must be challenging enough to be satisfying, but with a few low-hanging-fruit items to stave off despair first thing in the morning, when the list looms largest. Here are my tips for a great list:

2 Comments on “If I don’t write it down, can it even happen?”