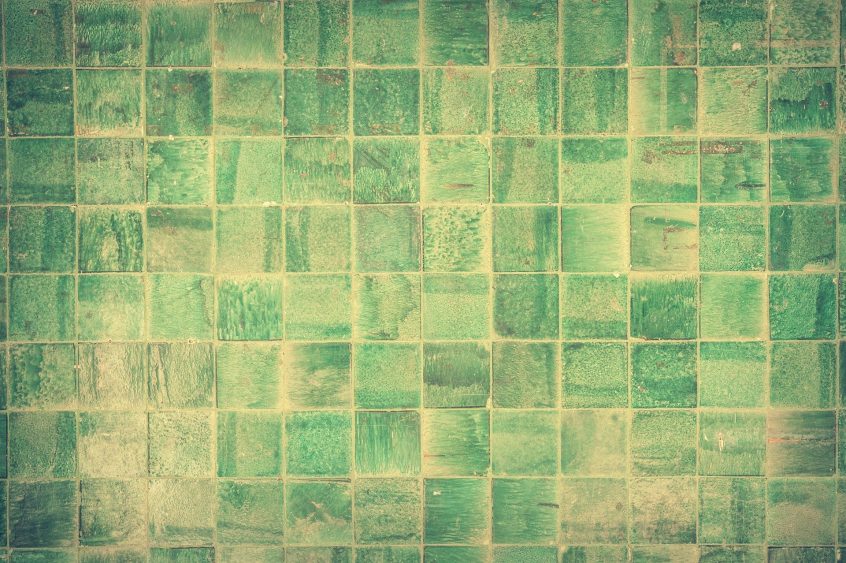 Recently, I had some disastrous tiling done in a small shower room in our house. (Not the tiles in the featured image. I couldn’t bear to include an actual photo.) It was so bad I almost felt I could have done better myself – and I’m no expert, having only ever applied nine tiles in my whole life. Meanwhile, the tiles applied by the ‘professional’ didn’t line up in the corners of the shower enclosure. The hastily applied plaster to which some of them were adhered was uneven, so the tiles did not lie flat. The grouting was patchy, with distinct holes in places. The shower itself was a strange hybrid of an existing mixer tap that must have been thirty years old, punching above its weight with a shiny new rainforest shower head, applied at a slight tilt. The silicone sealing, which apparently could be applied as a ten-minute afterthought, had not yet been done. The door was balanced in such a way that it propped up a loose tile or two, and protruded above the tiling by an awkward few centimetres as if in some Deconstructivist nightmare.

The person who had applied the tiles and sort of installed a new shower was due to come back and ‘finish the job’ the following morning, but instead I had to meet him at the front door with his tools, and tell him in no uncertain terms not to come in and do any more damage to my house. It gave me no pleasure to end the working relationship in that way, but it was the only possible solution. We’re now seeking quotes for a full renovation of the room by someone better qualified. In its current state it is unusable.

The emotional fallout from this incident was fleeting but surprisingly intense. In the long night between the full revelation of the awful tiling and the firing at dawn, I was consumed with disappointment, anger, and guilt at my own stupidity. There had been red flags aplenty before the job started, but I had chosen to ignore them. This is all a couple of weeks ago now, and I have calmed down, but I have also been thinking about how this relates to the work of editors, and how we can avoid being that builder, or providing that kind of (lack of) service. We are in a similarly unregulated profession, and we depend in the same way on gaining the trust of the client to allow us to carry out the work – work they know they can’t do themselves, parts of which might be obscure and a little mysterious. We owe a great duty of care to the client when we take on their project. Here’s how I think we can do better.

Treat the client with respect

Sometimes we will know much more than the client about editing, and the publishing process in general, especially if we are working with independent authors, academics, or businesses whose main function is not publishing. This, after all, is why they’re hiring us – for our expertise. But we shouldn’t ever prejudge the client’s understanding or ability, or assume any kind of superiority ourselves. Don’t presume, as my builder did, that a woman will need a husband to screw a ceiling rose back on. The client deserves respect at all times, and should never be patronised.

If you’re a regular reader of this blog, you may remember that I was very happy with a new ceiling a few weeks ago. So you might be surprised to learn that the very same person who relieved me of the ominous ceiling crack also butchered our shower. It goes to show that we all have specialisms, things we are better at and things we aren’t, and if a client asks us to do something outside of our expertise, we should be honest about what we can and can’t do. For example, I work extensively in non-fiction, less in fiction. I’m therefore perfectly happy copyediting a novel (and indeed, this is a really enjoyable diversion from my regular work), but I wouldn’t ever take on a developmental edit for a fiction author, or a novel critique. I just don’t have that level of expertise, and I wouldn’t pretend otherwise, no matter how much I needed the income.

Some of the problems that arose with the shower, I must take responsibility for. Apart from glibly brushing aside those fluttering crimson pennants, I was also aware from the outset that communication between the builder and me was compromised. (There was the issue of sexism, alluded to above, which might seem small and easy to laugh off, but it was symbolic of a deeper lack of respect for me and our home.) When we edit for publishers, a very simple email exchange about the level of editing and the fee might be enough, because usually it’s clear that both sides understand what the terminology means, and the extent of the work required. When we quote for indie authors, though, we need to set out much more carefully what we will do as part of the job, and what we will not do. A written quotation should be clearly itemised and well presented, even if it’s in the body of an email. It should be something that can be referred back to by either party as the job progresses. The quotation I received for the shower was scrawled on a piece of paper torn from a small notebook, and included minimal details about the items I would need to provide for him to complete the work. As I started to order things, it became clear to both of us exactly how little I knew about installing showers, which brings me to my next point.

Guide the client if they need help understanding what they need

How many times have we all been approached by a client who says they want a proofread, but when we assess the text it’s clear within the first paragraph that it needs much more extensive development before it’s anywhere near ready? (Or perhaps the simple truth is, it will never be ready.) I’m guessing it’s a lot. And I’m also guessing that it would be perfectly possible, in many of these cases, to sell the client a proofread, do just that, and pocket the fee. But then the client would still be left with something essentially unpublishable, even if it had been relieved of its spelling errors, and they’d be several hundred pounds (perhaps) poorer. At the point at which we assess a job we have a duty to be honest with the client about what they need, and not to sell them a service which is inappropriate. And if we can’t provide them with what they need ourselves, we should say so and direct them elsewhere. I often pass on work I know I’m not a good fit for myself. I either recommend trusted editorial colleagues who do that type of work themselves, or I suggest searching the CIEP Directory.

Be realistic about timescales

If a client wants 120,000 words copyediting by tomorrow evening, it’s almost certain that it can’t be done. (Perhaps there are editors who are approximately six times faster than me; I’m not ruling it out.) Again, we have a duty to be upfront with the client and tell them how long we think it will actually take, and then perhaps add a little contingency. Rushing a job serves no one well. It’s not good for the client, and if it means we do substandard work it has the potential to come back and bite us, even if not immediately. (Next time I’ll know that the work I commissioned should have taken longer than a couple of short days with several pasty breaks.) As an example, just the other day I turned down a job I really wanted to do, for a client I hadn’t worked with in a year as a result of the pandemic, because I knew I couldn’t fit it in. It was painful, but completely necessary.

No matter how long we’ve been editing – or building – there is always more to learn. Up-to-date techniques, new software, evolving professional standards. As with all the other points, we have a duty to our clients to keep up. I stay informed through my involvement with the CIEP. Recently I also joined the Alliance of Independent Authors (ALLi) as a Partner Member, because in the past few years I’ve been working more and more with indie authors, and this is a strand of work I’m interested in developing. I also undertake training, and most years attend the CIEP conference. This year I’m taking part in a session (a discussion about blogging), which I’m really excited about. I also regularly check and contribute to discussions on the CIEP forums, which is a great source of knowledge and ideas for CPD.

Finally, crucially, we should always take pride in our work. Had I turned in the editorial equivalent of that tiling job, I would have been utterly ashamed. I would not have been able to live with myself. We all make mistakes sometimes, because we’re human and all the better for it, but it’s completely unacceptable to ever – EVER – knowingly turn in a job we’ve rushed through with no thought or care, invoice for it and hope the client won’t notice what we’ve done. Such negligence reflects badly on the whole profession. We are not only letting the client down in that instance, but ourselves.

2 Comments on “How can we do the best job possible?”